Earlier this summer  [1]  , Gary Marcus – a New York University professor of neural science and psychology –  wrote a very influential piece for the New York Times called Face It, Your Brain Is a Computer . He attracted a lot of attention for his strong stance, and reinvigorated the debate about how we should or should not view the brain/computer analogy.

Since people had a lot to say about it, I want to go over Marcus’ article, along with some responses to the idea. My synopses do not always include the authors’ full arguments – I mainly focus on the parts I find most critical or thought-provoking – so make sure to check out the links to each piece if you’re interested in the full dialogue.

Much of Marcus’ time is dedicated to explaining why those who argue against the brain/computer analogy are wrong. To begin with, he says the idea that brains perform processes in parallel while computers complete things in a step-by-step process is “woefully out of date.” He goes on to explain that some degree of parallelism has been seen on computers since they came to the desk-top, and that hardware design has trended toward increased parallel processing ever since.

Next, Marcus analyzes the argument that computers are digital, but brains are analog. The main distinction here is that analog things work on a smooth-continuum while digital things work in divisible units. He dismisses this by saying that many of the parts making up the digital computer are analog, as were older computers. Additionally, he claims that “we still don’t really know whether our brains are analog or digital or some mix of the two.” I’ll let you decide how convincing these arguments are.

Amongst these and other criticisms to the stance that brains are not like computers, Marcus does give some reasons why he thinks they are like them, using the example of a specific type of computer called the field-programmable gate array . This type of computer can be designed to carry out many individual tasks which are then combined to compute the overall state of the system. “Much of the logic can be executed in parallel,” Marcus says, “like in the brain.”

Many programmable logic devices come together to form field-programmable gate arrays. I guess they almost look like neural network diagrams…

Vaughan Bell, a neuroscientist who practices clinical psychology and frequently writes for the mainstream media, responded to Marcus on a blog he helps run called Mind Hacks . His post, titled Computation is a lens , talks about whether the brain computes or whether computation is “just a convenient way of describing its function.”

Though the post is written as a balanced, diplomatic evaluation, it’s clear Bell thinks the brain/computer analogy is not very useful in describing the brain. He uses a stone as an example of why not:

“If you throw a stone you can describe its trajectory using calculus. Here we could ask a similar question: is the stone ‘computing’ the answer to a calculus equation that describes its flight, or is calculus just a convenient way of describing its trajectory.”

After Bell, Dr. Andrew Wilson of Leeds Beckett University published a blog post named Brains don’t Have to be Computers (A Purple Peril) . Wilson’s view builds on Bell’s idea by saying that while computation may be convenient for describing the brain’s function, it “may or may not be (and probably isn’t) the actual mechanism by which the brain does whatever it does.”

He uses the example of a polar planimeter , a machine that can be used to find an object’s area simply by tracing it, to make his argument. In short, Wilson makes two points with the planimeter: One is that the composition of a polar planimeter is what produces its behavior – directly measuring area – not a computation (such as multiplying length by height). The other, related point is that computation is not the only option for transforming an input to an output.

A diagram of a polar planimeter. By Keuffel & Esser Co. [Public domain], via Wikimedia Commons

Wilson’s analysis of this latter point is particularly interesting. He says that if you use computation to describe how a polar planimeter works, “you won’t have the right mechanism, and you will therefore ask the wrong questions as you do science on the planimeter (e.g. you’ll go hunting for the ‘length detectors’ and the ‘multiplication module’).” Though this post doesn’t tell us what the brain is doing if not computing, Wilson’s argument for why we should remain sensitive to other options is compelling.

To close, I’m going to introduce you to one more challenge; this one coming from way out in left field. In his Huffington Post article Is Your Brain Really a Computer, or Is It a Quantum Orchestra? Dr. Stuart Hameroff – a professor, anesthesiologist, and researcher at the University of Arizona – got in on the discussion  by saying that “the brain is looking more like an orchestra, a multi-scalar vibrational resonance system, than a computer.”

These vibrations, according to Hameroff, arise from components of neurons called microtubules. Traditionally, microtubles are thought of as one of the main structural elements of  cells, as well as a substrate that different molecules or proteins can travel along. Hameroff sees them as much more.

Evidently, microtubules are home to quantum events that oscillate at very high frequencies. Hameroff claims that this “quantum resonance” could be the root of many neural functions, such as memory encoding and  perhaps even consciousness. Essentially, these microtubules serve as yet another level of complexity in the neural processing hierarchy, acting from within a neuron to modulate its function.

So where does this leave us in terms of the brain/computer argument? Frankly, I can’t frame most of what Hameroff says in terms of the neuroscience that I know. I can say that at one point Hameroff recalls his 1980s proposal that microtubules are like computers, but the rest of his article makes it sound like he is staunchly opposed to calling brains computers.  I’m mostly hoping someone else can explain to me whether or not he’s a genius or a madman.

Is your brain a computer?

Another piece by Cassandra Chee

Many people, like Marcus, are willing to argue that if the brain and its components take in an input and transform it to a new output in some kind of algorithmic manner, then yes, it is a computer – but we still need to figure out how it’s computing. Others, including Bell and Wilson, are more comfortable saying that computation is a nice way to describe what the brain is doing, but calling the brain a computer or saying it computes doesn’t tell us much about the brain or the mechanism by which it works.

Beyond this there are probably thousands of others who have a different idea entirely, such as Hameroff. Like many questions in neuroscience, the best answer here is “we don’t really know” if the brain is a computer. But the freedom to explore that comes with uncertainty is what makes science enjoyable. 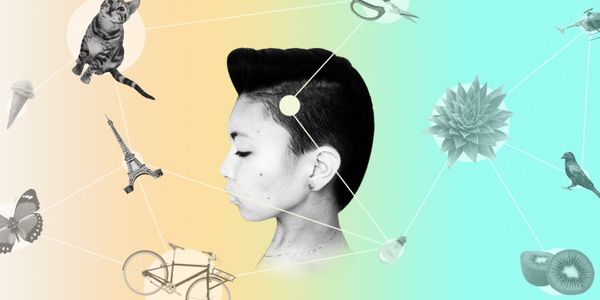 One of the things that pushed me toward neuroscience was the desire to understand memory and how we learn things. I know many others who feel the same way, but