Humans have eyes to observe the world in three dimensions, but how do people perceive their own motion/orientation in space even when their eyes are closed? Believe it or not, the brain accomplishes this feat by using the vestibular system in the inner ear to decipher the direction of rotational and linear acceleration applied to the head!

Motion sickness is often studied in relation to vestibular sense because it can be caused by both real motion and the illusion of motion  [5]  . For those unfortunate enough to encounter motion sickness, symptoms include nausea, vomiting, and cold sweating. So, how does the vestibular system enable the brain to interpret spatial sense and balance? This occurs when directional head movement shifts the fluid (the endolymph) within the vestibular labyrinth, a series of interconnected tubes and chambers housed within a bony structure in your head. This labyrinth is located within the inner ear along with the cochlea. Although both structures are connected and contain endolymph, they have different functions. Unlike the cochlea, which transduces sound into brain signals, the vestibular labyrinth consists of three semicircular canals which sense head rotation in the vertical and horizontal planes  [6]  .

Essentially ring-shaped tubes, each semicircular canal contains a specialized part called the ampulla which houses a gelantinous structure called the cupula. The deflection of the cupula from its normally stationary position within the ampulla, enables the brain to determine the direction of movement depending on the degree and direction of this displacement. Because the fluid within the ear flows bidirectionally and with limited resistance within the canal, head rotation results in the fluid moving in the opposite direction of the head movement. For example, if a person turns their head to the right, the fluid in the canal would flow to the left because the fluid’s movement briefly lags behind the movement of the head (a result of inertia). Consequently, the endolymph pushes on the cupula causing it to displace to the left. In turn, this deflection causes a burst of firing from receptor cells to travel to the brain via the vestibulocochlear cranial nerve.

Research by Reinis, Landolt, Weiss, & Money (1984) suggests that changing the concentration of the fluid within the vestibular canals may be a factor of nystagmus, or motion sickness. The injection of “heavy water” (water molecules that contain deuterium, an isotope of hydrogen with an extra neutron in its nucleus) intravenously and direct stimulation of the vestibular labyrinth in cats were both found to significantly cause motion sickness  [4]  . According to UW Neurobiology Professor Richard Robinson, this may hold significant consequences for getting “the spins,” motion sickness and vestibular disorientation upon sufficient levels of alcohol consumption  [3]  . He proposes that consuming enough alcohol may cause a change in blood alcohol concentration that alters the concentration of the fluid within the vestibular labyrinth. Such changes in concentration could temporarily displace the cupula at a fixed state. If Professor Robinson’s hypothesis holds true, the resulting disagreement between the brain’s perceived motion and the head’s actual motion may explain why some people get “the spins” after consuming alcohol! 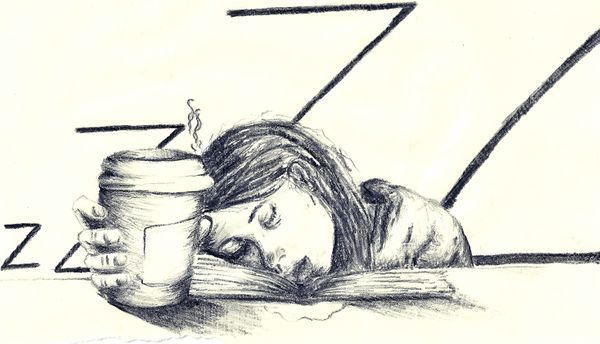 Ironically, I am currently in Odegaard, the University of Washington’s 24-hour library, writing an article about sleep deprivation at one in the morning. As I am writing, I am

Image Credit: Tamily Weissman, Harvard Those who have been reading carefully these past few days may have noticed the emergence of a theme in my reports. After starting with the way the tissue in the midbrain responds to changes in cellular and molecular signals