Sub-Saharan African tribes use scarification as a rite of passage for milestones such as transitioning into adulthood [1]. Along with scarification, many cultures around the world incorporate pain into deeply valued traditions. In comparison, in the United States, the desire to experience pain has remained perplexing to the general public, as most people do everything they can to prevent suffering. Scarification in particular can be viewed as unprofessional, rebellious, and aversive. However, people have been participating in extreme rituals throughout history [2]. This includes behaviors such as fire walking, body piercings, and masochism [2]. There are distinctions between the ways in which people implement pain into their lives, each with a different cultural view. The United States has created a distinct cultural divide between sexual masochism and self-harm. Despite the congruent motivations for participating in either, treatment varies greatly between masochistic behaviors. By reviewing the current definitions of both sexual masochism and self-harm, examining the physiological differences between masochists and controls, and finally, discussing why people implement this kind of pain, we can better understand the cultural view of these two behaviors. Furthermore, relating masochism to other disorders such as substance abuse demonstrates how one set form of treatment should not be applied to an entire group of people.

Masochism does not have one unique definition across academic literature. Masochism in general is defined as engaging in activities that lead to otherwise avoidable suffering [3, 4]. The most well-known form of masochism is found in a sexual context and includes deriving sexual gratification from being physically or emotionally abused [8, 6, 7, 5]. However, masochism also arises in non-sexual contexts termed “moral masochism” [3, 4]. This can be self-defeating behaviors, for instance, when people intentionally distract themselves from obtaining their goals [3, 4]. The pain, in either context, can be inflicted by another person or self-inflicted [5]. While there can be overlap in who participates in each form, many masochists only engage in either sexual masochism or moral masochism [3].

The lack of convergence to one definition may be the result of a fluid cultural perspective of masochism over time. The practice of BDSM, sexual activity involving practices such as the use of physical restraints, the granting and relinquishing of control, and the infliction of pain, was formerly associated with mental illness [9, 4]. The third edition of The Diagnostic and Statistical Manual of Mental Disorders (DSM-III) categorized masochism broadly as a personality disorder [9, 4]. While sexual masochism has been accepted over time, DSM-V—the most current edition—categorizes it as a paraphilic disorder: recurrent, intense, sexually arousing fantasies, urges, or behaviors that are distressing or disabling [9, 5]. Currently, treatment is not required for sexual masochism unless participation puts the person in danger [9, 5]. Moral masochism has since been separated from sexual masochism in both everyday language and in consideration of whether or not it should be diagnosed as a disorder. A common characteristic of people who participate in moral masochism seems to be acting from feelings of guilt and anxiety around being happy [3]. Self-harm generally co-occurs with mental illnesses like depression. However, unlike with mental illness, self-harm is an active behavior in which a person inflicts pain on oneself, placing it in the category of moral masochism [3, 4]. Self-harm is seen as a serious issue which requires immediate treatment, including therapy and sometimes medication. For the purposes of this article, “masochism” will be used as an all-encompassing term, sexual masochism will be referred to as such, and moral masochism will be represented by “self-harm.” Although moral masochism is a much more broad term that also encompasses behaviors such as recklessness and other extreme rituals, self-harm is used for simplicity [3, 4].

Perhaps one of the reasons sexual masochists are differentiated from the general population is because they perceive pain differently [9, 10, 8, 6, 7]. Two studies done by Defrin, Kamping, and their colleagues compared people who routinely practice sexual masochism and people who do not. Both studies used questionnaires to assess masochistic activities, context-related pain experiences and emotions, pain catastrophizing, and fear of pain [6, 7]. In addition, Defrin used pressure tools to assess participants’ pressure pain thresholds while Kamping used functional magnetic resonance imaging (fMRI) and photos of people to study brain activation patterns. Sexual masochists were found to have higher pain thresholds than controls, and their pain tolerance increased with the number of sessions and number of body parts involved in their masochistic behavior [6, 8, 7]. This increased pain tolerance is termed hypoalgesia. However, sexual masochists’ attitudes toward pain were determined to be context-dependent [6]. They report reduced pain intensity and unpleasantness when painful stimuli were presented in a sexual context and not in a neutral context [7, 6].  Meanwhile, controls did not experience a reduction in pain intensity [7, 6]. In addition, brain activation patterns of sexual masochists did not differ from controls when experiencing pain in a neutral context [7]. While their views of everyday pain such as tripping or work-related accidents are negative, sexual masochists are still able to receive some pleasure from these experiences [6]. The control sexual masochists gain from their behavior likely creates the difference in attitude towards pain [6]. The point arises that in order to continue deriving the same gratification from pain, sexual masochists need to keep increasing the extremity of their practices. More extreme practices impose a greater risk of severe injury, turning an accepted sexual practice into a serious problem.

Although people who self-harm use pain as an outlet and to regain a sense of control similar to the way sexual masochists do, they do not necessarily enjoy the pain they experience [11, 6, 5]. The control over their own pain satisfies the desire for autonomy over their experiences [5, 6]. This is an attempt to avoid uncontrollable, greater suffering, by willingly subjecting oneself to an autonomous form of suffering [3]. This need for control likely stems from a history of trauma or mental illness [6]. Because self-harm often occurs with mental disorders like depression, people may feel a lack of autonomy over their mental state and emotions, and may seek to regain some of that control by projecting their emotional pain into physical pain [11, 5]. Self-reports found that while experiencing pain, people who self-harm enter a dissociative-like state, and afterwards, they feel better anchored in reality, suggesting a shift in mental state [5]. Along with sexual masochists, people who self-harm show similar evidence of higher pain thresholds compared to people who do not participate in harming behavior [6]. This explanation for the reasoning behind self-harm is typical of many mental illnesses, and it is probably not surprising to people who consider self-harm a serious problem. However, sexual masochism stems from the same experiences, such as trauma, and need for control, indicating similar underlying origins and possibly motivations for both self-harm and sexual masochism.

Luo and colleagues sought to understand some of the long-term effects of participating in sexual masochistic behavior, specifically its effect on empathy: the ability to understand and share the emotional states of others [9, 10]. The study looked at both questionnaire responses and electroencephalography (EEG) data while participants viewed images of people in pain, people in pain while engaged in sexual acts, and neutral images. They found that BDSM experience does not alter participants’ ability for empathy completely. However, sexual masochists reported feeling less empathetic than controls. This reduction in empathic responses was seen more so in females than males and was associated with frequent exposure to pain-inflicting situations. Although this particular study focused on sexual masochists, there is evidence that this result can be applied to frequent exposure to pain in other situations as well [9,10].

While sexual masochism does not often require intervention, self-harm is treated with a preventative approach [11]. This means pain is completely removed from the person’s routine, which in many cases is the best method of treatment. However, it can also force people to use more extreme and dangerous means of acquiring pain by utilizing whatever they have immediate access to. Objects such as ligatures or unsanitary tools may be used because masochists have become dependence upon self harm as a coping mechanism. Although controversial, minimization approaches can be implemented when it seems necessary. Minimization already has some application in such areas as substance misuse and involves educating people about safety and supervising injections. This could be used as an approach to self-harm in a similar manner by providing information and means to self-harm safely while also receiving therapy. This is generally seen as an expression that self-harm is okay and goes against the principle of “do no harm.” However, in certain cases, it can provide a net reduction in harm whereas the traditional approach could cause excess harm. As there are many parallels between substance abuse disorder and masochism, treating people who self-harm in a similar way may prove effective. While completely cutting a substance abuser off from access to drugs may not always be the best solution, the same may be said for people who self-harm [11].

Comparing sexual masochism, self-harm, and substance abuse disorder imposes the question of why all three are perceived and treated so differently. Both self-harm and sexual masochism follow routine patterns [11]. The physical pain has been suggested to divert individuals’ attention to provide an escape from unwanted emotional distress along with being a method of obtaining control [6, 5, 11, 3]. The use of pain as a coping mechanism and sense of control can create a dependent relationship in which the person relies on the pain to alleviate emotional tension [11, 5]. Without this release, masochists may not have other sufficient means of coping in congruence with a substance abuser’s dependence on drugs [11, 5]. Despite the similar motivations behind self-harm and sexual masochism and the parallels between masochism and substance abuse disorder, these three conditions are perceived and treated very differently [5]. Because self-harm is heavily associated with other mental illnesses such as depression and suicidal ideation, it will likely continue to be seen as a much more serious issue than sexual masochism. However, it is unclear how associated sexual masochism is with these mental illnesses, and future research should investigate this. Currently, self-harm is treated in a homogenized way despite the unique situations that give rise to self-harm behavior, and a reductionist approach is one method of catering treatment to the individual [11]. Society is excellent at creating distinct lines and putting people into broad categories, but this can be limiting. As the clear distinctions between self-harm, masochism, and substance abuse disorder can be blurred, the same can be said for other culturally defined behaviors. Identifying parallels between different behaviors, common or taboo, is a step towards creating discussion around the topics that can aid in novel, more effective treatments, and possibly a reduction in stigma around people who practice particular behaviors. 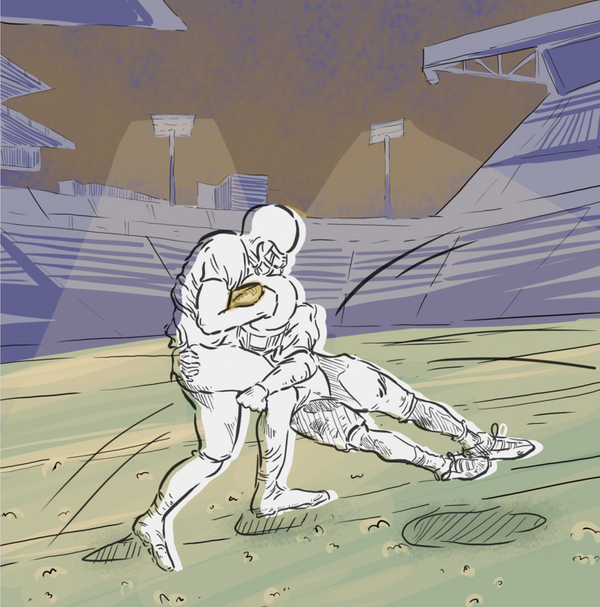 Across the country, the lights are warming up for college game night. One freshman is getting his first starting spot as kick-returner. Looking over the crowded stadium, he sees his