It is clear that not all wiring in our nervous system is genetic. People are not born with the capacity to cook a soufflé, play the piano, or ride a bike – marking a clear distinction between connections within the brain that are dictated by genetics and those that are obtained through our interaction with the environment.

Jeff Lichtman gave SfN’s Presidential Lecture detailing some of the theories and methods that will allow us to take a new approach to the study of how neural circuits interact with each other, how the connections within the circuit form, and what they mean on a broad scale – a discipline known as Connectomics.

The study of Connectomics dates back almost to the beginning of neuroscience. The brilliant Santiago Ramón y Cajal constructed diagrams illustrating the ways in which certain parts of the nervous system and distinct types of neurons connected to form working networks. Using the Golgi stain, Cajal was able to look at small populations of neurons which allowed for demarcating types of nervous system tissue. This practice became commonplace and stayed in vogue until very recently.

Examining the various components of the nervous system in this way has its limitations, however. For one, defining neural circuits by the types of neural tissue they contain only accounts for the genetic and molecular aspects of the circuit. The experiential component that causes changes in circuitry based on learning and memory are not accounted for, so the focus of this approach is intrinsically narrow.

The next issue is the lack of quantitative data that can be gained by such methods. Doing stains like Cajal did only shows a small subset of the nervous system. This is, of course, necessary – otherwise the images would come out as giant, indecipherable, black masses – but it illustrates a problem that needed to be solved in order to take a Connectomic approach to examining circuitry.

In order to solve this problem, imaging developers and molecular biologists came together to develop today’s Brainbow technology, which gives researchers the ability to stochastically generate and stain the membranes of neurons nearly any color imaginable. The result is a Technicolor picture of a neural slice as vibrant as something out of a children’s coloring book

Recent advancements in this technique have allowed for unfathomably detailed and informative reconstruction of small brain areas.

Now, coupled with 3-D imaging techniques and advanced computing, very small but comprehensive areas of the brain can be computer generated and disassembled to show what is contained within, and how the overall structure relates individual parts to a functional whole. So far, one billionth of the mouse brain has been reconstructed. A humble beginning, maybe, but one with immense promise for the future of neuroscience.

Image Credit: Tamily Weissman, Harvard Those who have been reading carefully these past few days may have noticed the emergence of a theme in my reports. After starting with the way the tissue in the midbrain responds to changes in cellular and molecular signals 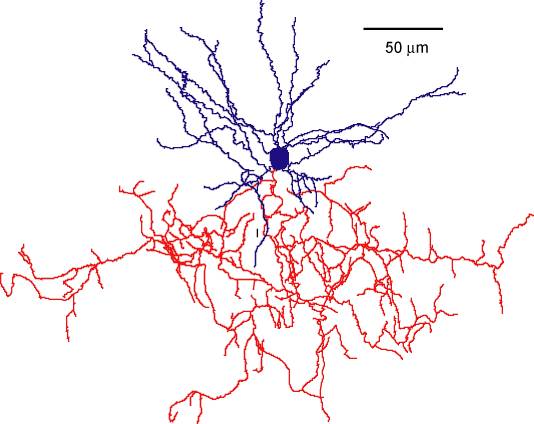 Today’s topic of interest was Learning and Memory – particularly the ways in which memories are stored. For many years it was commonly accepted that a memory was physically represented