“Everything may die, nothing may be regenerated”  –Santiago Ramón y Cajal

When neurons were first discovered, the prominent perspective on neuroanatomy was “once it’s gone, it’s gone for good.” The belief that neurons were frail strands that could never be repaired once damaged was a misinformed but universally held truth. However, once neural stem cells (NSCs) were discovered, it was theoretically possible for damaged neurons to be replaced. Neural stem cells have the potential to repair a multitude of neurological issues, including extensive neurological damage. These cells are multipotent, meaning they can differentiate into several neural lineages, unlike other cells, which are forever destined to be a single cell type. Such properties of neural stem cells give them interesting possibilities for future applications. Many incurable neurological conditions are categorized as neurodegenerative diseases, incredibly powerful diseases that target neurons for destruction. Thus, NSCs offer the potential to replace some of the structures that these diseases have destroyed.

NSCs are guided by the brain through a multitude of chemical and physical changes that determine the specialization of NSCs. When NSCs specialize, they will become exactly what the brain, and the body requires for overall health. There are two types of stem cells: embryonic and adult stem cells. The main difference between the two is their potential differentiations. Embryonic stem cells are pluripotent, meaning they can become any cell type in the body, while adult stem cells are multipotent, meaning they can only differentiate into the cell types of the tissue in which they reside. In the human brain, there are three primary lineages NSCs can follow: mature neurons, astrocytes, and oligodendrocytes [1]. These lineages ultimately form multiple cell types that help sustain a healthy mammalian brain, and all three lineages are necessary for proper cognitive functioning.

A study by Palmer et al. demonstrated how NSCs could be taken from the hippocampus and grown in vitro to form the three types of possible lineages [2]. Whether an NSC forms a neuron or an astrocyte depends on the kinds of growth factors the NSC receives, or in other words, the environment in which it grows. The microenvironment of the brain plays a crucial role in determining the cell type of a NSC. Palmer et al. were able to identify specific growth factors that lead to differentiation of NSCs, which introduces the possibility of lab-grown neurons [2]. Once researchers understand which pathways certain growth factors take, they can manipulate them after injury to stimulate neural regeneration. For example, if one growth factor or set of growth factors stimulates the development of a particular neuron type, physicians could inject those growth factors into a patient that, through injury or disease, is lacking that specific neuron type. With the combination of these introduced growth factors and transplanted NSCs, the body could regrow the missing or damaged neurons. This procedure of injection and transplantation has already been applied to neurodegenerative diseases such as Parkinson’s disease, Huntington’s disease, and Alzheimer’s disease in hopes of managing or curing them.

A first step in applying NSCs to medicine would be to utilize their capabilities to manage diseases that are directly or indirectly associated with neuronal death. One of these diseases is Parkinson’s disease (PD), a neurodegenerative disease that leads to the destruction of dopamine-synthesizing (dopaminergic) neurons responsible for fine movement. People with PD display symptoms ranging from mild tremors to the inability to walk due to muscular stiffness.

Kim et al. conducted research on PD using embryonic stem cells that differentiated into dopaminergic neurons [3]. These neurons, when transplanted into Parkinson’s model mice, quickly began repairing the lesion responsible for the Parkinson-like symptoms. After nine weeks, mice that received the embryonic-based dopamine neurons had a significant increase in movement ability on the lesion side of their bodies when compared to the non-lesion side acting as a control [3]. Similarly, a study by Redmond et al. showed how undifferentiated human NSCs transplanted in primates with a chemical model of PD had significant positive effects on restoring functionality [4].

However, contrary to other studies, Redmond observed certain abnormalities that led to new theories on the mechanisms through which NSCs enact functional change [4]. While some human neural stem cells (hNSCs) differentiated into dopamine neurons, there were a large number of neurons that differentiated into astrocytes that synthesized a growth factor called GDNF. GDNF promoted development of dopamine neurons from undifferentiated NSCs as well as aided the efficient production and release of dopamine from all dopaminergic-neurons. Redmond theorized that NSCs not only differentiate into the necessary cells, but also into cells that change the microenvironment of an injured area in the brain so that efficient neurogenesis and recovery might occur. This new theory suggests that NSCs do not just produce three lineages of cells, but produce a multitude of compounds and cell types that are important for neurogenesis in a multifaceted way [4].

Alzheimer’s disease (AD) is a neurodegenerative disease that eventually leads to neural death and brain shrinkage. This intense decrease in neurons results in memory loss, confusion, and delusions. AD destroys multiple types of neurons throughout the brain, making it a prime candidate for NSC testing. Blurton-Jones et al. conducted research on genetically modified rats, bred to model human AD, by transplanting undifferentiated NSCs into both hippocampi of the rodents [5]. The use of undifferentiated NSCs, as opposed to differentiated NSCs, demonstrates an undifferentiated NSC’s ability to correctly differentiate into the cell type most necessary for homeostasis in vivo. After four weeks, rats were given hippocampal-dependent behavior tasks such as the Morris Water Maze and a context-dependent novel object recognition test. Rats that were given the NSCs performed significantly better on these cognitive tests when compared to a control group of untreated AD rat models. These results demonstrated how NSCs might recover cognitive deficits caused by Alzheimer’s disease. The observed effect on the model rat brains was an increase in hippocampal synaptic density and increased levels of a neurotrophic growth factor, called BDNF [5]. Cognitive deficits in patients with Alzheimer’s disease are strongly correlated to hippocampal density, so an increase in density caused by the NSCs is theorized to be the catalyst for recovery in rats [6].

Similar tests performed by Xuan et al. mirrored Blurton-Jones’s work. The parallel between the two results suggests that transplanted NSCs could potentially manage symptoms of AD, since both studies found a neurotrophic growth factor (BDNF) that heavily influenced the outcomes of NSC transplantations [6]. BDNF, or brain-derived neurotrophic factor, acts as a regulator for undifferentiated NSCs. Neurotrophins are generally used by the brain as tools for altering synaptic connectivity. In fact, BDNF has been shown to be a critical component in the creation of memories in the hippocampus [6]. Blurton-Jones demonstrated how the presence of BDNF led to increased cognitive recovery when compared to NSCs that were BDNF-deficient [5]. The demonstrated necessity for neurotrophins such as BDNF is an indicator of their potential application towards neural regeneration through changes in the microenvironment of the brain. These findings give merit to Redmond’s theory on how the microenvironment plays a role in the behavior of stem cells. The different neuorotrophic factors secreted in Blurton-Jones’s study and Redmond’s study, BDNF and GDNF respectively, indicates how stem cells are capable of changing the microenvironment of the brain to facilitate the production of the most necessary neural lineage of the particular brain area. Not only does this evidence demonstrate their capabilities, but it also exhibits the observed importance of modifying the microenvironment to better suit the stem cells’ needs.

As with the other diseases presented, Huntington’s disease (HD) is a neurodegenerative disease that degrades neurons. Due to the deterioration of neurons that are crucial for memory, people with HD suffer from memory loss, cognitive confusion, and difficulty thinking and understanding. Patients with HD may also benefit from NSC transplants, as observed in a study by Bachoud-Levi et al. Data obtained by Bachoud-Levi over a four-year period illustrates how patients with HD who were grafted with stem cells experienced improvements or reduced decline in their cognitive functions [7]. These grafts were made of human fetal neuroblast (HFN), a type of NSC obtained from fetuses. Five patients were given a graft containing the HFN and were tested on various cognitive criteria, including general cognitive state, selective attention, executive functions, speech and language, memory, and visuospatial performances. Out of the five who received the graft, three had either stable or improved cognitive functioning when compared to a control group of 22 patients with Huntington’s disease [7].

Even more impressive is that in the three patients who experienced an increase in cognitive functioning, the benefits from the procedure persisted for up to three years after the first graft [6]. These results are comparable to a study done by Freeman et al. that transplanted human fetal striatal tissue into a patient with HD [8]. Freeman used clinical unified Huntington’s disease rating scale scores to quantitate how affected someone’s cognition was by HD. Scores were taken every three months, both before the surgery and after the surgery. Scores were consistently lower after the graft, even at 15 months after transplantation, which indicated a lessened effect on cognition by HD. Freeman’s group noticed that transplanted cells were not affected by typical Huntington’s neurodegeneration as other host cells were. This suggests that genetic diseases, such as HD, do not affect stem cells if they are from an outside source and thus do not contain the disease gene. It was also observed that normal host cells that should have innervated the striatum, but could not due to striatal degeneration resulting from HD, were able to innervate onto the transplanted cells [8]. This indicates that transplanted cells can operate successfully with host cells on a number of levels, which ultimately leads to cognitive improvement. This research demonstrates, once again, how impressive NSCs are at managing symptoms of currently incurable neurodegenerative diseases.

NSCs are the future of neuroscience and for good reason—the  promising results of research could mean that diseases causing uncontrollable tremors, memory loss, and delirium can now be managed. Although this field is relatively new and requires years of additional research, there have already been incredible discoveries that will prove fruitful to the greater understanding of the brain. Perhaps years from now scientists will look back at our current treatments and question their efficacy after the revolutionary progress of NSCs. In other words, the great Santiago Ramón y Cajal was wrong – the future of neuroscience lies not in death and decay, but in growth and regeneration.

The spinal cord is like a highway, sending and receiving information between the brain and the whole body. Our abilities to sense, move, and react are all transmitted as information 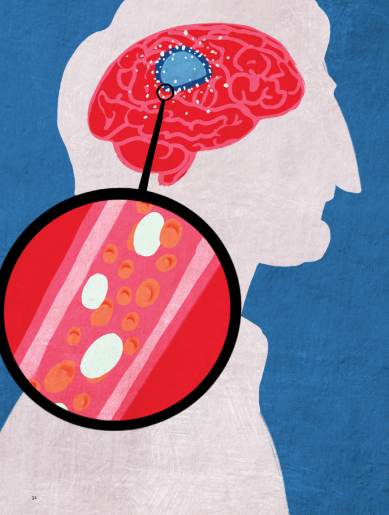 A fifty-year-old man with glioblastoma – one of the most invasive and aggressive types of brain cancer – had failed to find a treatment that worked for him; radiation, anti-tumor chemotherapy, and