Let’s take a short quiz: look at an object and close one eye. Which eye is left open – your right or your left? Next, put one hand on your head. Which hand did you use? Finally, cross one leg over another. Which leg is on top? You may have been taught that if you consistently used your right side, it’s likely that you’re a left-brained person. This means that you’re a logical, analytical, and rational person. If you used your left side, you’re a right-brained person, filled with curiosity and creativity. Although this is accepted as conventional wisdom, in reality, the evidence suggests that the neural processes underlying creativity are much more complicated. Still, there is an abundance of songs, books, and courses about honing your left brain to be an efficient worker or training your right brain to unleash your creativity. The myth likely began in 1969, when ten patients with severe epilepsy desperately sought out help from neurobiologist Roger Wolcott Sperry [1]. Sperry theorized that cutting the corpus callosum, a bundle of fibers that connect the left and right hemispheres of the brain, would decrease epileptic episodes. He had been experimenting on cats and monkeys, but he finally decided to test this theory on these ten patients. Remarkably, his operation improved the condition of nine out of ten patients. However, the legacy of this experiment was different altogether.

One of Sperry’s most renowned legacies was the possibility that the right-brain and left-brain process emotion and logical information differently. Although his results were inconclusive on this matter, he inspired a wave of research and interest into the dichotomy of the two hemispheres of the brain. The theories soon evolved into robust comparisons of the two sides, including where creativity originates from. Although early research suggests that creativity is housed in the right hemisphere of the brain, newer research indicates that creativity involves interhemispheric interaction.

Despite being a fundamental human quality, the definition of creativity has been debated for many years. Authors, poets, and biologists offer their unique definitions of creativity, but the scientific community generally defines it as a thought process used to generate ideas and find relationships between concepts. Research articles also call this divergent thinking. There isn’t a single measurement of creativity, and many different tests have been derived to measure it – some better than others. A key component of most tests, however, is that they are based on participants performing tasks while under observation.

One of the most famous studies on creativity and the right hemisphere was done in 2003 at Northwestern University, where researchers gave participants seven seconds to find a word that connects three other words into a compound word. For instance, given “palm/shoe/house”, the participant could answer “tree” which would then produce the three phrases “palm tree”, “shoe tree” and “treehouse ” [2].  Then, they were asked if they felt that the answer came to them intuitively.  This test is commonly used to examine creativity, and the term intuition in this study has been equated to creativity. To test the right brain, they presented the task to the participant’s left eye and vice versa. By presenting to one eye, they presumed that it would primarily activate only one hemisphere of the brain. Researchers found that when the participants answered a question intuitively, there was greater activation in the right hemisphere than in the left [2].

The right brain theory was further studied from the lens of visuospatial and storytelling creativity. A prime example of this experiment was done in 2011 that used the non-verbal Torrance Test of Creative Thinking (TTCT) test. This test is commonly used to measure visuospatial activity, the ability to analyze visual and spatial relationships amongst objects [3]. Participants were given multiple pictures of lines and shapes. Their task was to create a story that connected all of the pictures and give that story a title. Meanwhile, researchers took high-resolution MRI scans of the participants’ brains. Then, their stories were scored on “fluency, originality, elaboration, the abstractness of titles, and resistance to premature closure” using a standardized scale [3]. High scores on this scale indicate high creativity. The researchers found that high creativity scores were related to activity in the grey matter of the right parietal lobe. Therefore, this study showed that creativity involving visuospatial activity is also more active in the right hemisphere [3].

While much of the research so far has supported the theory that the right hemisphere controls creativity, it is still very unlikely that creative activity is strictly from one side of the brain. After all, even the most dichotomized processes require cooperation on both sides of the brain [5]. For instance, the left hemisphere holds the ability to articulate words but not understand or remember them, while the right hemisphere can recognize words but not speak them. Still, their combined functions are necessary for everyday language production and comprehension [5]. Likewise, creativity is probably a joint effort by both hemispheres of the brain.

In contrast to previous research, some studies show that the left hemisphere is just as active during creative activity. In 2019, researchers at Southwest University used MRI and creativity tests to test two different types of creativity: visuospatial and verbal [6]. They found that people with higher scores of visuospatial creativity exhibited higher activity of the right hemisphere in the MRI. However, people with higher verbal creativity exhibited balance among the left and right hemispheres. This suggests that different types of creativity utilize different pathways in the brain. Furthermore, this study indicates that verbal creativity relies more on interhemispheric interaction [6].

Newer studies reveal that creativity cannot be minimized to one part of the brain. There is likely lots of communication across the brain depending on the type of creativity. A 2014 study by Manish Saggar from Stanford University used a Pictionary-based game to stimulate creativity in participants [7]. Meanwhile, they ran an fMRI on the creative brain. fMRI, functional magnetic resonance imaging, is an imaging tool commonly used in neuroscience to record neuron activity across the brain. During the game, many different parts of the brain across both hemispheres became active including the cerebellum, thalamus, left parietal cortex, right frontal cortex, and other left hemisphere regions of the brain. In fact, they found that the left prefrontal regions of the brain were increasingly used as the difficulty of the creative challenge increased. The study concluded that creativity relies heavily on the interaction between both hemispheres and the cerebellum [7].

The idea of creativity being interconnected has also been explored through the lens of known brain networks. For instance, recent studies show that creativity is closely involved with the Default Mode Network (DMN) and the Executive Control Network (ECN) [8]. Spanning across both hemispheres of the brain, the DMN is active when a person is not focused on the outside world. This can be seen during activities such as daydreaming or mind-wandering. In contrast, the ECN is located across the prefrontal and posterior parietal lobes and is involved with working memory, response inhibition, and task-set switching [8][9]. In 2015, the researchers Roger Beaty and Mathias Benedek found that the DMN and ECN are both involved in creativity. They asked participants to find creative uses for everyday objects while being observed by an fMRI; they then applied complex data acquisition and processing to derive the results. More specifically, the DMN is involved with generating ideas and the ECN is involved in executing the ideas. The study also suggests that the DMN and ECN were activated at different times in the process of creativity, with the DMN activated earlier and the ECN later [8][9].

These findings seem to directly contradict the earlier research that showed that the right hemisphere has more influence on creativity. One reason for this contradiction could be the availability of newer technology that yields more accurate results [5]. The vast majority of studies that reported higher right hemisphere activation during creative processes used electroencephalography (EEG). EEG is relatively imprecise at measuring changes, locations, and patterns of activation in the brain. More recent studies employ a variety of new technologies that are more capable of resolving brain activity at finer scales. The discrepancy might also arise from the wide range of creativity tests, from creating stories to finding words to creating art pieces. Advancements in recording neural activity and standardized tests will continue to help uncover the true nature of creativity in the brain.

The biological location of creativity is still being studied and debated today. Although the left-brain versus right-brain theories have a strong historical foundation, newer studies have revealed that the truth is far more complex and likely involves the entire brain. These studies raise new questions about whether creativity can be characterized as a singular process, or if it should be split into visuospatial, verbal, or other types of creative processes. With ever-evolving technologies, we can continue to find new insights into long-established neural processes. 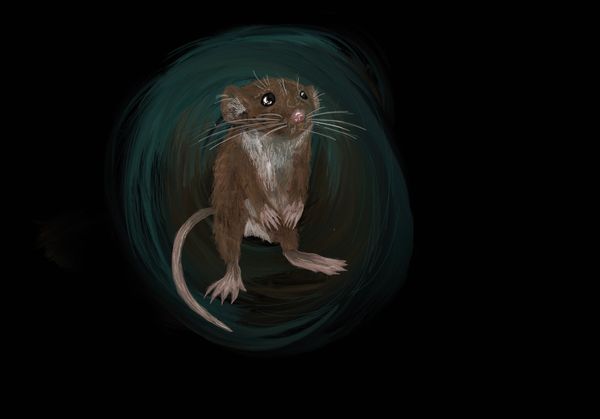 In Denmark, researchers at the University of Copenhagen have identified specific genetic predispositions in mice that eventually impair the development of oligodendrocytes, crucial cells that produce the myelin sheath.