The term “worker bee” has become synonymous with a person who spends their days toiling away without thinking at all about the task at hand.  However, this idea simply does not represent the true neural capacity of bees.  The study of honeybees, termed apiology, has proven immensely helpful in understanding color vision in invertebrates over the last century, for studying human behavior and social organization, and behavioral plasticity. The potential of behavioral plasticity, derived from the phenomenon of behavioral plasticity, is especially important because it allows different parts of the bee brain to grow and rewire itself based on experience and interaction, thus altering their behavior in later situations because of their broader understanding [1].  In more recent studies, honeybees have shown signs of both spatial and temporal reasoning, exemplified by their ability to create three-dimensional maps of the hive, as well as the ability to predict future outcomes based on past experiences [2].

The bee brain, like that of most insects, contains twin structures known as mushroom bodies. These mushroom bodies are involved in memory storage, function learning, and spatial reasoning, similar to the role of the hippocampus in mammals. However, the sheer size of the honeybee brain sets them apart from most other insects—it’s about fifty times larger than that of a fruit fly.  This augmented size allows for a greater number of neurons and neuronal networks, which gives bees the capacity for more extensive memory and learning, as well as behavioral plasticity [2].  While these two ideas may seem relatively unrelated, behavioral plasticity absolutely requires a greater number of neurons, as it involves creating new connections between cells based on the bee’s memories and understanding. It is because of this that bees can learn and use their experiences in future situations, an ability not found in smaller insects.

Learning by association was first tested by Ivan Pavlov, who conducted a famous experiment where he taught dogs to associate the ringing of a bell with receiving food. Now known as Pavlovian learning, or classical conditioning, this process helped to lay a foundation for our modern understanding of experience-based learning. However, Pavlov’s theory concentrated exclusively on mammals as model organisms, failing to focus on the higher cognitive functions present in certain insects, including honeybees [3].  With the shock generated by Pavlov’s breakthrough technique, nobody from his time would have expected bees to be capable of the same learning methods.

The bee’s capacity for experience-based learning isn’t just an interesting fact—this ability plays a significant role in real-world situations, such as the ability to discern which flowers will bear nectar, especially in a field the bee has never seen before.  Martin Giurfa conducted an experiment in which he researched honeybees’ capacity for experience-based learning by testing their ability to find a food source and then recognize it again in a later trial [4]. In the experiment, bees were trained to recognize two types of stimuli—a set of images placed either vertically or horizontally—and choose the one that had a drop of sugar water. Through positive reinforcement, the honeybees were able to associate the vertical images with the sugar water reward and consistently ignored the horizontal images that gave a drop of quinine, a strongly bitter substance and punishment for an incorrect choice [4].

While this experiment proved that honeybees respond to the simple stimuli and reward system of Pavlovian learning, they have also demonstrated intelligence that extends far beyond simple conditioning. Bees can do more than memorize the relationship between a stimuli and a response—they can also use their memories and experiences to make decisions [2]. Enlarged mushroom bodies play a key role in temporal and spatial reasoning as well as allowing individuals to analyze new knowledge and apply it to their current situation. Temporal reasoning allows bees to predict future events in a way similar to how we predict the weather or plan ahead for a test by using an expected outcome to make a more informed decision. Just like seeing rain clouds reminds us to bring an umbrella, bees can analyze their memories to understand events and probable outcomes of specific situations. This is commonly observed as bees huddling up next to each other, refusing to leave the hive when warning signs appear of a coming storm [2].

Spatial reasoning plays an important role in allowing bees not only to make mental maps of the hive, but also to mentally re-orient images of maps that are mirrored, rotated, or distorted in other ways.  Honeybees use important landmarks along with celestial cues to help them determine the shortest path to a flower, a literal beeline from their hive, and can memorize pathways up to six miles long [5,6].  While this may seem like a simple memorization task, bees must apply their knowledge of where these landmarks lie in space to determine their position relative to the flower and their home.

Bees are also capable of analyzing and communicating key ideas between hive members. The “waggle dance”, as most researchers call it, allows honeybees to communicate their knowledge and experiences about flower locations and possible enemies [7].  The recipient of this information can then understand it by applying memories of their own experiences, evaluating the similarities, and internalizing the new knowledge [2]. This can also allow a bee to find a new location without another hive member to lead them there. A single bee can also recognize when other bees are already grouped around a flower, and will come to join them, because they realize that a large grouping indicates a high probability of a flower providing nectar. This complex analysis demands a higher cognitive function in bees, something not found in any other insects to date [2].

So the next time someone calls you a “worker bee”, take it as a compliment. Bees are intelligent and capable of various types of learning, ranging from association to complex spatial and temporal reasoning. Honeybees are unique from the other insects because of their increased brain capacity and size, giving them higher-functioning Pavlovian learning and behavioral plasticity, as well as the ability to communicate with other hive members. Their interpretation of the messages and ability to identify the actions of others makes them almost a hive mind, though each individual bee is just as important and ingenious as the next.

In 1917, two curious researchers looking to examine the effects of fear conditioning began a study at Johns Hopkins University that would later become one of the most controversial experiments 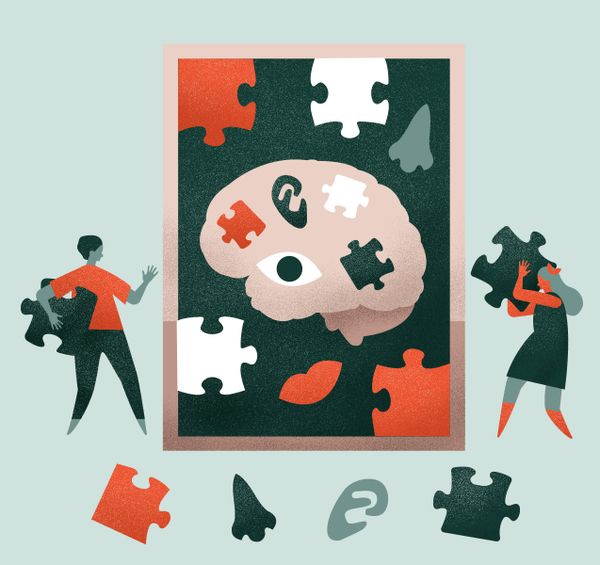 The adult brain weighs about three pounds and looks fairly unassuming. The organ’s seemingly uniform appearance does little to betray its underlying complexity. Over a period of several years,