It is hard to imagine a life without memory. Childhood memories and experiences continue to shape how one grows and develops as an adult. Everyone carves time out of their schedule to meet up with old friends and reminisce about old times. Even while listening to a favorite song on the radio, we are somehow able to sing along to the lyrics without ever needing to look them up. But what if, as we got older, our ability to remember started to disappear?

Unfortunately, this is the reality that many people with Alzheimer’s disease (AD) face. This neurological disorder currently affects as many as 5.1 million Americans and makes up 60 to 80% of dementia cases, which are characterized by a severe decline in mental ability [2][1]. Most people begin to notice symptoms after age 60, and the irreversible disease progresses in severity until the eventual death of brain cells and loss of brain function [1].  Typically, physicians are able to first detect the disease when patients exhibit difficulty remembering words and numbers, which later progresses to trouble remembering recent events and personal information or history. The most severe stage of Alzheimer’s is characterized by the inability to recall family members, carry on a full conversation, and perform personal care such as brushing one’s teeth [1]. Although the symptoms of AD have been closely observed since its discovery by Dr. Aiolis Alzheimer in 1906, little is known about the disorder, and a cure has yet to be found.

At the age of 52, Dr. Aiolis Alzheimer stood in front of his colleagues in Tübingen, Germany, and described the first diagnosed case of Alzheimer’s disease. In 1901, he was the head of a laboratory at the Royal Psychiatric Clinic in Frankfurt when he came across a 51-year old woman named Auguste Deter. Deter exhibited severe signs of forgetfulness. She had sudden bouts of irritability, extreme confusion and disorientation, and auditory hallucinations. When asked to identify common items such as a pencil, she was unable to remember the name, instead labeling it as a pen. She could not even recall the year or hospital she was in. Dr. Alzheimer diligently observed Deter, writing down each of their conversations, and followed her case until her death in 1906. Then, he investigated her brain [3].

Staining her brain with a silver solution, Alzheimer was able to pick out the neurofibrils – bundles of fibrous tissue supporting axons. He noticed that several were tangled together, remarking that the fibrils had condensed dangerously into bundles that occupied cellular space, replacing regions of ganglion cells [4]. In addition, he found small congregations of cells embedded amongst the neurons, describing them as “numerous small miliary foci...found in the superior layers… determined by the storage of a peculiar material in the cortex [3]”. These would later be known as beta-amyloid plaques. Alzheimer was perplexed by the presence of both of these fatty sacks in the cortex and the blocks of neurofibril tangles that seemed to replace brain cells. Indeed, it was these observations that spurred the research and development of the two most widely accepted hypotheses for Alzheimer’s disease today.

One such hypothesis suggests that beta-amyloid plaques are the main contributor to Alzheimer’s. These plaques are clusters of insoluble and misfolded proteins. In Alzheimer’s disease, they are largely made up of beta-amyloid proteins, which bind together in the extracellular space of the Central Nervous System. Although the full mechanism of how these plaques contribute to AD is unknown, it is believed that sticky buildup of protein aggregation in the brain essentially acts as an inhibitor that clogs up synaptic connections and decreases brain function [6]. In a 1990 study by Harvard Medical School, differentiated and undifferentiated hippocampal neurons were treated with varying concentrations of beta-amyloid proteins. Researchers found that low doses of beta-amyloid proteins in live undifferentiated hippocampal neurons were essential for neuronal formation. However, when mature neurons were treated with high doses, axonal and dendritic retraction was observed [*Call out - image of neuron with axon and dendrite parts labeled with descriptions] resulting in loss of synaptic connectivity and, eventually, death [6]. This suggests that beta-amyloid proteins shift from beneficial at low doses in initial neuronal stages to malicious in larger amounts after neuronal differentiation.

The change in function of these proteins is caused by the Amyloid Precursor Protein (APP), which generates beta-amyloid proteins in neurons [7]. This transmembrane protein is, in its normal length, necessary for motor reflexes and normal neuronal function. In some instances, it is cleaved at a location in its extracellular domain (the alpha cleavage site) by the enzyme alpha secretase. This releases APP’s extracellular domain from the cell membrane to float freely. This now free-floating protein can be cleaved by two more enzymes, beta secretase and gamma secretase, to form the final amyloid-beta protein [7]. In Alzheimer’s disease, an increase of amyloid plaques is due to a genetic mutation in which a valine amino acid is changed to an isoleucine amino acid in the APP. This may either result in an increased production of beta amyloid proteins or a stickier version, which can inhibit the transportation of information from neurons [9].

Interestingly, individuals with Down Syndrome all express Alzheimer’s disease at around forty years of age [8]. Down Syndrome is a genetic disorder in which an individual possesses an extra Chromosome 21 in addition to the normal two. As a result of this information, it is widely believed that Alzheimer’s is linked to mutational changes of the APP gene located on Chromosome 21.

Tau proteins also play a detrimental role in AD. In the normal brain, tau proteins stabilize microtubules, which maintain cellular structure and act as structural support for neurons. For Alzheimer’s disease patients, tau proteins become separated from their proper position and aggregate together in the extracellular matrix to form clumps, much like amyloid plaques. These clumps are called neurofibril tangles and they intertwine with each other and occupy space in the neuron environment, eventually leading to cell death in a manner possibly similar to the amyloid plaques mechanism. The now-free microtubules also lose their function, which could further contribute to neuronal destruction [10].

The discovery of the role of tau proteins in AD is relatively new, and the full mechanism of the production of neurofibril tangles is unknown. Currently, there are two proposed mechanisms for this process. Some researchers believe that tau proteins become phosphorylated, leading to aggregation, while others believe that it is structural differences, and not the addition of phosphate, that lead to the formation of tangles [10]. Neurofibril tangles have only recently been accepted as a leading cause of AD, and further research is presently in progress, so their role in AD might be better understood in the near future.

Currently, there are only four FDA approved drug treatments that are capable of treating Alzheimer’s disease. Donepezil, rivastigmine, and galantamine are prescribed for mild to moderate disease progression, while memantine is for used for more severe cases. The first three drugs belong to a class called cholinesterase inhibitors, which only slow the process of degrading neurotransmitters but do not cure the disease itself. Neurotransmitters are chemicals released by neurons in order to transmit information and trigger action potentials. They travel between synapses of neurons to properly send signals.

Memantine, on the other hand, mediates the neurotransmitter glutamate and its binding site. These glutamate binding sites are present in the brain and are necessary for synaptic connectivity and memory formation. However, over-activation by glutamate can actually cause debilitating neuronal problems such as dementia, epilepsy and glaucoma. Memantine treats this issue by mediating the binding and blocking of glutamate on the glutamate receptors, prohibiting damage from hyperactivity [15].

Although extensive research has been done, Alzheimer’s is a disease that is still not well understood. Currently, it is hypothesized that amyloid plaques and tau proteins are interrelated based on two experiments from 2001. In one of these studies, mice were genetically mutated to overexpress the human tau protein. Larger amounts of beta amyloid proteins were then seen to appear near the tangles caused by the tau, suggesting that the presence of tau could induce production of beta amyloids [12]. Similarly, in the second study, mutated mice were observed to express known tau proteins as well as a gene that overexpresses human APP. APP was produced in the expected amount, but interestingly, the amount of neurofibril tangles increased [16]. A proposed mechanism for this phenomenon is that beta-amyloids initiate the conversion of tau into a toxic state that could trigger further production of beta-amyloid in a positive feedback loop and vice versa [5]. Additional research suggests other potential mechanisms of Alzheimer’s disease in which beta-amyloids directly break down neuronal synapses, completely bypassing the aggregation of the amyloid plaques [11].

Clearly, little is known about the true mechanisms behind the development of Alzheimer’s disease, and even less is known about ways to stop its progression. However, AD is one of the most heavily researched diseases today, and we continue to uncover new information about plaques and tangles every year. Researchers remain hopeful that Alzheimer’s disease will soon be fully understood, leading us one step closer to developing a cure. 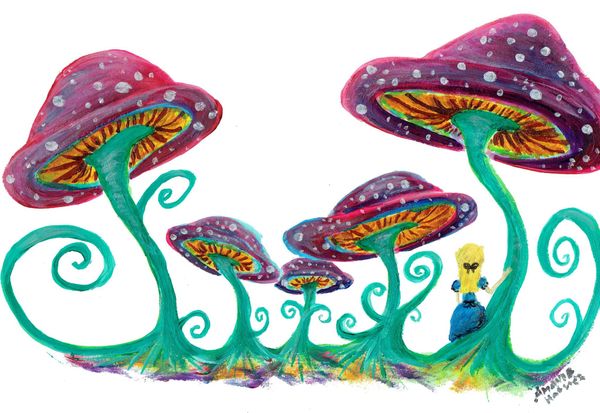 Take a moment to read these quotations: “I try to judge less and forgive more. I no longer worry about money.” “I think my heart is more open to all

Throughout history, magicians have often refused to reveal the secrets behind their trade. Veiled by centuries of occult traditions, these performers executed their tricks in front of spellbound audiences, often