The human face is the index of the mind. We differentiate between individuals and recognize familiar faces based on one’s distinctive facial structure. You identify your mother from your neighbor and your friend from a stranger simply by their appearance.  But imagine if every face was a fresh face.

Prosopagnosia, fittingly labeled “face blindness,” is a disorder of face perception where the ability to recognize faces is impaired. While anyone can have trouble recognizing faces out of context, prosopagnosics cannot identify their friends, relatives, or even parents. They often complain that they have trouble following movies or television shows because they cannot recognize characters. Some report difficulties in judging age, gender, emotional expressions, or the direction of a person’s gaze [1].

Unlike amnesiacs, who also do not recognize familiar faces, prosopagnosics have intact memories. The distinguishing factor of the disorder: impaired facial recognition systems in the brain. The fusiform gyrus, located in the occipital and temporal lobes beneath the thalamus and hippocampus, is associated with facial recognition. There are varying levels of fusiform gyrus impairment linked to neurological peculiarities such as prosopagnosia, autism, hallucinations, and synesthesia.

Prosopagnosia can be present from birth (developmental prosopagnosia) or acquired. These forms differ in etiology and therefore, they will be addressed separately.

Developmental prosopagnosia establishes itself during early childhood and there is no cure. Studies suggest that genetic factors are responsible for this condition, but a single gene has not yet been identified [2].

In an investigation to study genetic factors, almost 700 randomly selected students were administered a survey which identified seventeen as prosopagnosics. The family members of fourteen of these students were tested for facial-recognition deficiencies, and in all fourteen families, at least one affected family member was found [2]. These same researchers found that the disorder is regularly transmitted from generation to generation and proposed that the prosopagnosia trait was dominant and transmitted through a single mutation of an autosomal (non-sex-linked) gene [2].

Acquired prosopagnosia results from brain damage. This form of prosopagnosia was first documented in 1844, although reports of acquired face blindness date to antiquity. Acquired prosopagnosia lacks the genetic factors proposed to underlie the developmental condition. Most individuals sustain a closed head injury or suffer from a stroke, and a lesion is formed in the core neural regions responsible for normal facial processing. Some of the most informative research on prosopagnosia has dealt with these core regions, as discussed in the following section.

The neural basis of face processing has received extensive research attention in the last two decades. Functional neuroimaging studies show several cortical regions with stronger responses to faces than to control stimuli, such as objects. The most notable areas that respond include the fusiform gyrus, inferior occipital gyrus, and superior temporal sulcus [3]

The fusiform gyrus is part of the temporal and occipital lobes. Within the fusiform gyrus is the region linked to facial recognition, known as the fusiform face area (FFA). During functional magnetic resonance imaging (fMRI), this area produces twice the response to face stimuli than to control stimuli like houses, hands, the backs of human heads, and flowers [4].

The inferior occipital gyrus (IOG), although difficult to identify exactly, is a portion of the occipital lobe. Less investigation has been completed for this region, but evidence shows that the IOG responds more strongly to faces than to objects in greater than half of participants scanned [4].

The superior temporal sulcus is a depression in the folds of the temporal lobe. The cells in this location allow for detection of changeable aspects of faces, such as gaze or expression. It should be noted, however, that these findings were most strongly noted in non-human primates [5].

The current understanding of face perception considers these structures to be the core of what is called the ventral occipitotemporal cortex (VOTC). However, these regions constitute the beginning of a broader network of extended nodes responsible for different aspects of face processing such as gaze, emotions, expressions, and face selectivity [6]. As a group, individuals with prosopagnosia have shown reduced facial selectivity in these core neural regions [7]. Curiously, though, some of the participants studied did show normal face selectivity [7].

Face Selectivity as a Tool to Study Prosopagnosia

One way to measure face selectivity is through event related potentials (ERPs). ERPs are the electrical responses measured in the brain that results from a particular neural event or stimulus. These events can be sensory, cognitive, or motor [8]. In our case, the event is presentation of a face or non-face object.

The ERPs labeled M170 and N170 show a larger response to faces than non-faces. Some individuals with developmental prosopagnosia showed normal face selectivity, as measured by these ERPs, while others did not, which has lead scientists to question the correlation between impaired facial recognition and the variation in particular neural responses [9]. So, although researchers believe these responses may be useful to identify different groups of facial recognition deficiencies, they have proved insufficient for identifying prosopagnosics, which has led to further investigation of the brain circuitry involved in this disorder.

According to more recent research, individuals with developmental prosopagnosia exhibit reduced white matter tracts connecting the core VOTC to parts of the extended face network. This means that impaired facial perception may arise from a failure to propagate signals between the core and extended nodes, rather than a dysfunctional core [10].

Taken together, these findings indicate that the core VOTC, the link between the core and extended nodes, or the extended nodes themselves could be the root of the disorder. This could explain the variation in results from research with prosopagnosics.

There is no formal treatment for prosopagnosia. However, there is the opportunity for those with prosopagnosia to participate in experimental studies. Some research focuses on advancing the understanding of the causes and neurological bases of prosopagnosia, whereas other investigators are examining the effectiveness of training programs designed to improve face recognition.

A handful of published cases have demonstrated focused attempts to provide rehabilitation. These suggest that the lesions in the core face-processing areas are resistant to treatment. Compensatory strategies such as the use of voice, body shape, and gait to recognize people, currently serve as a the best treatment efforts [12].

Further investigation into prosopagnosia and the neurological basis of face perception is needed. Examining cases of acquired and developmental prosopagnosia indicates existence of a complex neural network devoted to our recognition of faces. Consideration of novel methods that yield improvement in facial recognition is necessary to aid those that currently suffer from prosopagnosia. In studying the mechanism of a malfunctioning facial recognition system, a more holistic and neural-based face perception theory can be shaped. Maybe once this has been accomplished the idea of a familiar face will be conceivable to everyone.

In 6th century Thessaly, the poet Simonides of Ceos is leaving a nobleman’s banquet hall after a rather unfortunate lyrical poem performance. As he steps outside, a loud crash 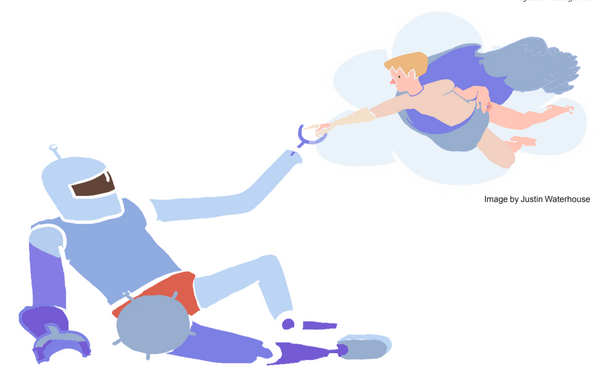 The brain’s processing prowess has prompted many to wonder whether computers could become “smarter” by mimicking human brains. This might be accomplished by designing artificial neural networks, a manufactured