Refer to this video below for the artist's interpretation of their piece, or continue scrolling for a text version.

I wanted to make something that cannot be recreated with the current scientific techniques. Neuroscience continues to grow in popularity and attracts many scientists from various fields. A popular technique now is to clear a piece of tissue for better imaging. This allows for whole brains and small animals to be fully imaged and is commonly paired with sparse labeling of cells for anatomical studies. The significance and the necessity of microscopy techniques is apparent with the Chemistry Nobel Prize of 2014 being awarded for the development of novel microscopy methods. I wanted to paint an image that would be impossible to take - a cleared human head with sparse neuronal labeling.

The piece is inspired by Albert Pan’s image , “Larva Brainbow Zebrafish,” which won the Olympus Bioscapes Gallery contest in 2008. I have been in awe of this image since I first saw it and it remains my favorite neuroscience photo. Taking a similar photograph of a cleared human head with sparse fluorescent labeling would be impossible with the clearing techniques, microscopy, and genetic manipulations involved. Furthermore, the embroidery highlights structures and connections involved in the ascending and descending pain pathway.

Ascending pain pathway is depicted with incoming sensory information from the spinal cord synapsing onto the thalamus, where the information then gets relayed to the somatosensory cortex. The descending pathway modulates the pain sensation. This descending pathway involves cortical projections from the insular and the cingulate cortex synapsing onto the amygdala, then the periaqueductal gray, and finally the rostral ventromedial medulla before traversing back down the spinal cord. Although I took some artistic liberty with the embroidering, similar labeling of specific pathways cannot be done in any organisms.

I painted most of the women with acrylic paint, then depicted the fluorescent labeling with thread embroidered directly onto the painted canvas. This approach allows higher contrast between dark and light colors. Before starting on the piece, I spent some weeks familiarizing myself with our human head anatomy by drawing faces, the facial muscles, bones, and some superficial nerves. I would like to remake this in several years when I am more confident in my ability to paint anatomically correct structures and incorporate a more dynamic pose. 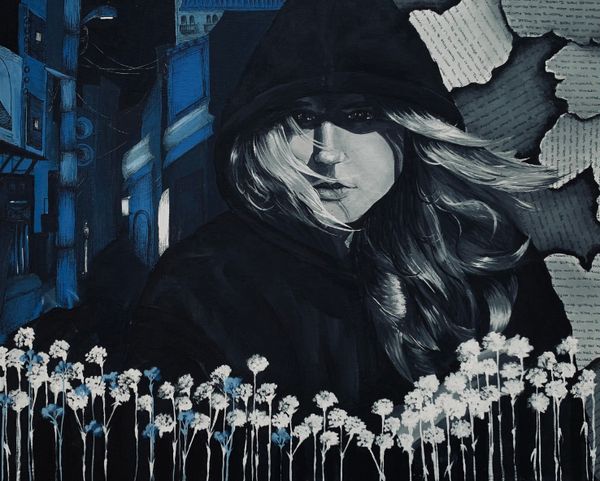 Refer to this video below for the artist's interpretation of their piece, or continue scrolling for a text version. “Looking for the Found” is a piece depicting the depressive psychological 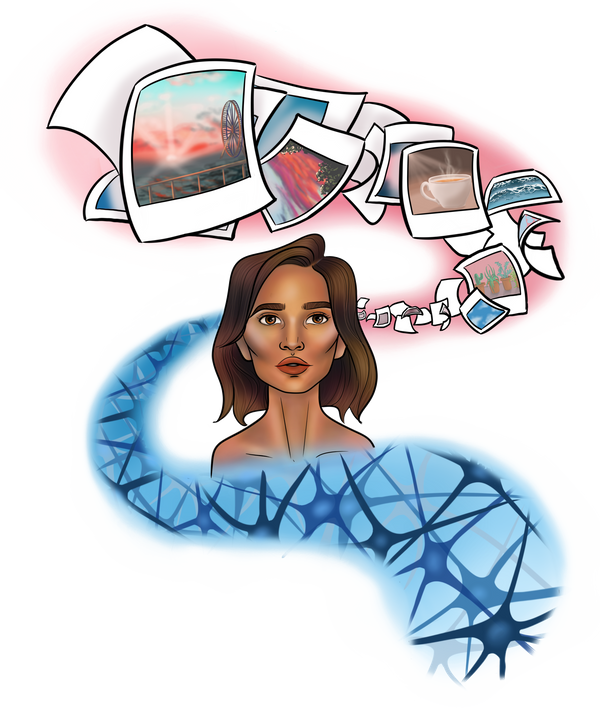 Find out the role of the NMDA-AMPA receptor system in our ability to associate the occurrence of two events, allowing our brains to learn and form memories.